But anyway!  Surely you were wondering what SU is, and how was it invented?

I know what is interesting, that is why I am providing you with interviews with three beautiful ladies who are the founders of the Students Union in International House Tashkent,

Who came up with the idea?

Alisher Khasanovich, we just implemented it.

How was the president chosen?

Anastasia: I proposed my candidacy, because I showed the initiative and know better than others what is required.

And the rest of the SU?

Anastasia: I knew most of our girls, I knew their interests, and in other words I trusted them.

Kira: You mean all the direction leaders were from the same group?

Have you quarreled over the division of “power”?

Anastasia: We did not have a “separation of power”, because we were also friends.  Even when there were some misunderstandings, we settled them.

Asal: We have always tried to come to one solution, everyone said what he thinks, even though it could drag on for a long time.  There is never any disagreement, but everyone knows his job, his place.  We understood that we need to build a foundation on which everything should be based.

What’s the point of SU?  How did you present it?

Anastasia: In fact, in my head the SU structure was created a little differently.  It was rather a circle of interests.  We have a lot of different people with different interests at the Lyceum, and we wanted them to be able to somehow prove themselves in the Lyceum, and for this they needed people on whom they could rely.  That is, the leaders of the directions are also a person who could report this to the administration.  Later, when we became more familiar with what SU is in general, our plans for “circles” faded into the background.

Asal: For you to understand, we wanted to unite the lyceum and the student council so much that they could take each other to a new level.  The teachers helped us in every possible way.

Assol: But this is no longer the case.  At first, everyone was against it, we had a “war”.  Since they believed that this was all at the expense of their studies.  Only the administration supported us.  But after a while, even the teaching staff began to be more loyal to us.

Kira: So there were absolutely no concessions from the teachers?

They were very skeptical about us, there was no question of indulgences.  It even got to the point that teachers threatened not to close the subject if the child is in SU.  Due to the fact that we had good relations with the administration, the teachers asked themselves the question “What right do they have to ask the children away from our lessons?”

Do you Keep an eye on current presidents?

Previously, we talked a lot with subsequent presidents, but now we have no idea who they are.

What are the disadvantages of SU?

Assol: It never happens that everything is perfect.  What was considered a minus for us may be considered a plus for the next generation.  But it was with us that the biggest problem was associated with the creation of clubs.  We supported the ideas of the children, but they did not meet the expectations.

Asal: It is impossible to think over everything in advance, because many things were built on trust, which in the end was questioned.  After all we were the first high school with the Students Union.

Anastasia: Nobody knew how to “correctly” drive SU, but we put a lot of effort into it, despite the fact that it was new for everyone.

Assol: We even wrote the SU codex ourselves.

Assol: Yes yes, we did not exhibit it anywhere.  But we had a task from our director to write an official code.  It was not easy, but somehow we finished it.

Asal: None of us was not a lawyer, not an accountant, but at the same time we were everything.

The biggest plus of being su.

Be a part of it.  Be able to change something.  But the most important plus is the ability to embody your desires and goals on this platform.  Every child who has a desire to do something can leave a big mark on the lyceum.

Describe a funny situation related to SU at the Lyceum.

We wanted to do a “Welcome party” for the freshmen after our graduation.

And there were problems with the balloons, and as a result there was an inscription “Shelcome party”.  Also, when representatives of MGIMO first came to us, we counted everything.  We went to hotels, made badges, met at the airport, went with them to Samarkand.  Calculated every minute.  And it bore fruits.

Oh, and graduation is a separate topic for us.  We were guest-workers in skirts.  But it was by the time of graduation that they began to perceive us most adequately, everyone had a good impression of SU.  We hope this somehow influenced the next generation.

The Student Council was created by students for students, it is a cell that should work together, be a guide for students and the administration of the lyceum.  Don’t make hunger games out of it!

At the end I would like to add my favorite phrase,

“Honors for your reading!” 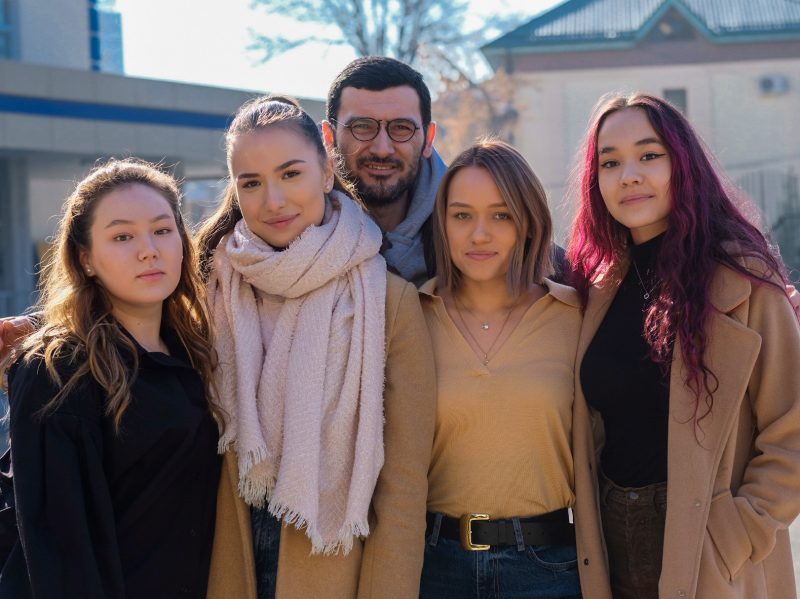