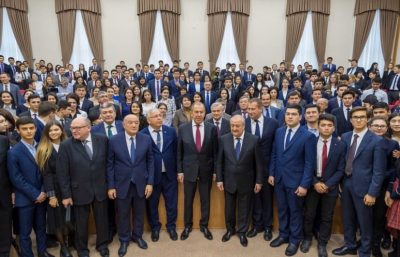 On January 16, 2020, students of MGIMO classes (the Russian Foreign Ministry) of the “International House-Tashkent” Academic Lyceum TIIAME took part in the meeting with Sergey Lavrov.

Sergey Lavrov paid an official visit to Uzbekistan, concluding his diplomatic tour of South and Central Asia. Having met with Foreign Minister Abdulaziz Kamilov and President of the Republic of Uzbekistan Shavkat Mirziyoyev, the flagship of Russian diplomacy visited the MGIMO branch, which was opened a month ago in Tashkent. Created by the Presidential Decree of February 11, 2019, the branch of the authoritative Russian university accepted the first students in the current academic year and began implementing its programs on the resource base of the University of World Economics and Diplomacy (UWED).

The foreign ministers of Uzbekistan and Russia addressed the students and faculty of the MGIMO branch and UWED in the assembly hall of the new educational institution. The meeting was opened with a traditional

rendition of the anthem MGIMO, authored by S.V. Lavrov. Sergey Lavrov gave a lecture and answered questions from the future diplomats. With a unique opportunity to hear firsthand about the political situation of the modern world, in his lecture, Lavrov gave a brief description of the political architecture of the modern world order.   Explaining Russian foreign policy priorities, he noted that Russia is promoting a multipolar world order based on respect for international law, first of all the UN Charter.

And he added that all these years, immediately after the graduation of MGIMO, he “did not just hold some positions” but always honestly performed his duties. “I continue to do it now,” Sergey Lavrov concluded. And he advised the students of Uzbekistan that it should be done with dignity for the prosperity of their country. We take this instructive phrase of Sergey Lavrov on our note.